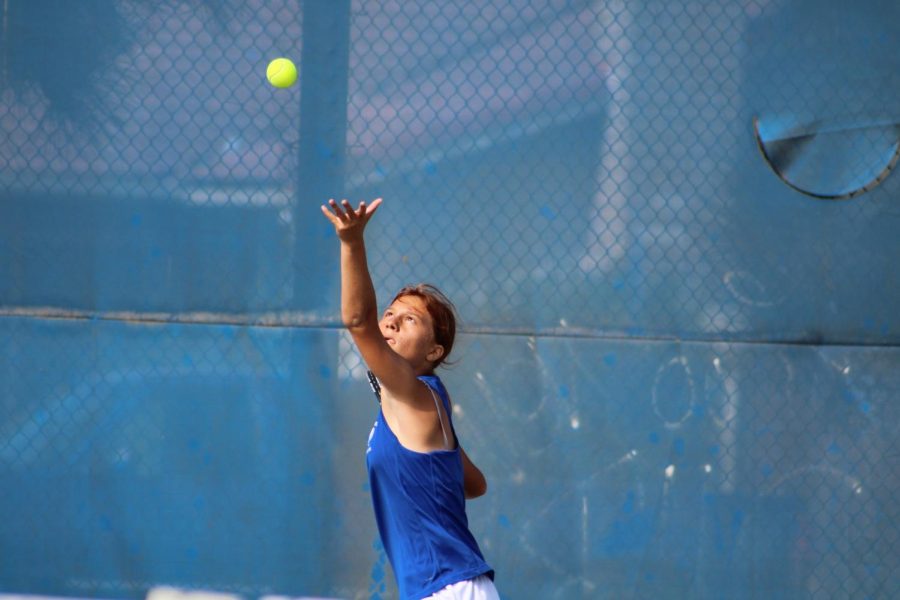 On Tuesday, October 5th, our Lompoc girls’ Tennis team faced off against our rival school, Cabrillo, for their league play. The girls were hopeful that they could get a win on the board, and had all the motivation they needed.

Although they put in their best efforts, the Lompoc Braves fell short, losing 7-11. Even so, the team celebrates singles player, Miranda Felix, and doubles teams, Sofia and Gabi, Esmeralda and Lola, along with Emma and Ava, in racking up points throughout the game. Varsity also congratulates the JV team, who beat Cabrillo 10-8 during their away matches.

I asked Junior, Esmeralda Ortiz, questions about her and her partners performance on Tuesday.

Q: How do you think you/you and your partner performed during your Cabrillo matchup?

Esmeralda: “At first I did think my partner and I were doing well, but later on, in the other matches, there were more difficult shots than we expected. We started slowing down a bit and it kind of got in our way.”

Q: What could you have done better?

Esmeralda: “I think my partner and I do have great teamwork, but there are things like volleying and positioning that messed us up a bit. I think that’s something we have to work on as a team, trusting each other with certain stuff.”

Q: What motivated you most today?

Esmeralda: “I was pretty upset that we lost our second match so that definitely motivated me to do better. I think our coach’s words encouraged me as well to just go for it.

I also decided to ask a couple of questions about league play.”

Q: How is league play different from pre-season?

Esmeralda: “It’s a lot harder in league play because we are playing teams who have more experience. I think pre-season was easier because the teams were around our skill level.”

Q: At this point, you guys should have played every team in the league, out of every team you have played, who has been the most challenging opponent?

Esmeralda: “That’s a hard question. In all honesty, I think the girls from Santa Barbara. They just went for it and smashed everything. I think they were the hardest opponents I’ve ever faced.”

After discussing obstacles, league play, and tough opponents, it seems as though the team has grown together and has faced many strong challengers. We hope the team continues to grow and keeps up the hard work! Go Braves!